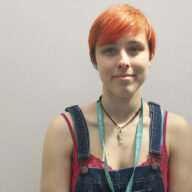 Alex Rose McClarron-Thompson, 19, is studying on the Level 3 Extended Diploma in Games Development at Banbury and Bicester College. She is in her final year and has recently received an unconditional offer from Royal Leamington Spa College to study on a Level 3, next-generation 3D-modelling animation and visual-effects course.

Before coming to study with us at the Activate Learning Banbury campus, Alex studied at a sixth-form college, where she felt that she was not getting the social nor academic support that she needed as a person with autism. Thankfully, the friends she made through local youth groups recommended Activate Learning to her and singled out for praise the support that is available to students here.

After Alex attended an Open Event and a Taster Event, where she met tutors and became familiar with the software and facilities at the Banbury campus, she signed up to study. The change from sixth form to college had a profoundly beneficial and lasting effect on Alex and she noted that, “The personality that I used to have at sixth form went out of the window within two weeks because I felt a lot more comfortable here. There was a lot of support available here, that wasn’t there for me at sixth form.” She went on to explain that the transformation occurred, in part, due to the more adult environment at the college, adding that, “You can be what you want or who you want, you can dye your hair any bonkers colour that you want but all that matters is that you put in the work and the effort. You have people around you to support you and the teachers will help you get the grade you want. They look at every student as an individual and are really open and honest with you. The study support people and the student support people as well are great.”

It’s fantastic to see the change that has been inspired in Alex and we’re really humbled by the idea that the students and staff at Banbury campus have given her the platform she needed to grow. A consequence of this is that Alex realised that she did not want others to struggle in the way that she had to and has since decided to support her fellow students in a number of ways. She now volunteers to staff Open Events at the college and helps out where she can. She said that the opportunity to do so has been what she’s enjoyed most about Activate Learning and that, “It’s been great to hear the feedback from parents about how I’ve helped their children feel welcomed and supported in the way that they need.”

When asked about the relevance of her Games Development programme to her future goals, Alex said that, “The course is very, very practical. There is a lot of coursework and there are four exams, but a lot of it is spread out over the course. I’d say it’s a 50/50 split between coursework and practical work, though it varies depending on what year you’re in. I think it strikes the right balance. The Learning Philosophy definitely influences the course design: we learn everything first and then put it into practice.” Alex is currently predicted a grade of “distinction merit merit” for her work at Activate Learning. She is confident that the education and training she has received during her studies at Banbury and Bicester College will help her in her goal of entering the sound or visual effects industry.

Furthermore, the work on the Learning Attributes that Alex has been doing each term (whereby learners identify an area of themselves for improvement) has helped her increase her self-esteem.

In her own words, Alex says that the, “facilities are really good here too and Activate Learning also work with really good companies. We have a lot of high-tech computers and great resources in the library. It’s close to the town centre too.”

Alex would “definitely” recommend Banbury and Bicester College and when asked if she had anything she would like to say to prospective students, she added that, “remember: it’s up to you. It’s your life. Don’t let others put you down. If you want to do a course, go for it. At the Open Events, don’t just sit back and look at your mum; ask the tutors about the course, ask them what you need to do to pass the course. You’ll be very different here. I tell the parents who come here that they will see their child grow in ways you wouldn’t believe: you’ll see someone who goes from not having a voice, to being someone who speaks their mind. I love the fact that Activate Learning colleges support those changes.”

An inspirational message from an inspiring student! Thank you to Alex for sharing her story and the challenges she has faced. We at Activate Learning wish her all the best with her continued studies in Royal Leamington Spa!