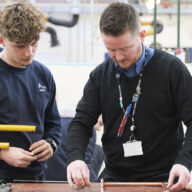 “I always wanted to become a teacher, ever since a young age.”

Enda McBrien was, you might say, born into teaching. His father was a headmaster at a school and his sister followed in their dad’s footsteps by going into teaching too.

“I’ve always had this desire to impart my knowledge onto other,” continues Enda.

But Enda didn’t follow the conventional route into the teaching profession. By his own admission he enjoyed school and stayed on to study A Levels after completing his GCSEs.

However, rather than progress onto university and follow his heart into teaching, he became an apprentice plumber and started a career in the plumbing trade.

It wasn’t until years later, when he was helping new apprentices to learn on the job, that he realised it wasn’t too late to give up on his life’s dream.

“I had the apprentices working alongside me, showing them what to do and I realised it was something that I really liked,” he said.

So, after years as a plumber, Enda took the brave step to come back to education and did his PGCE at Activate Learning’s Reading College.

He said: “I really enjoyed studying for my PGCE at Activate Learning. I was teaching at Reading College, which is part of its group of colleges, so everything was under the one roof.

“All the support network that I needed was there and the majority of my classmates became my colleagues. It was great!”

Enda now works for Activate Learning and has gone on to become the Faculty Manager for Technology, overseeing the teaching staff that are training the next generations of plumbers.

Reflecting on his change in career, Enda says the most rewarding thing about his decision to change careers and go into teaching is seeing the students grow and succeed.

“Seeing my ex-students running their own businesses and driving by with their names on the side of their van is really, really rewarding as I had a part to play in that.”